Last week, as I was going through my upcoming Algebra II lessons, I saw “Modeling with a Parabola” was coming up.  I had to look through the lesson to refresh myself on what the book was doing…which means that when I taught it last year, it was dry and forgettable!!  I knew it could be better.  So I did what I always do when I have a math question – I took to Twitter: 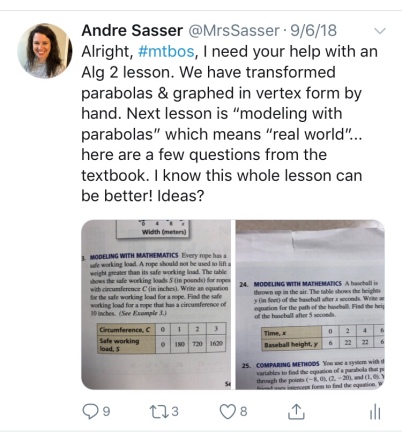 It wasn’t long before I got several replies– thanks everyone for the help!!– but one stood out to me as being fun and easy to implement: 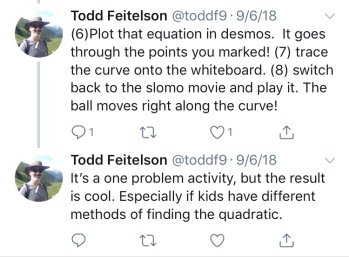 [Side note:  I was fortunate enough to meet Todd at Twitter Math Camp this summer!  Had I not gone to Cleveland, Todd may have not ever followed me on Twitter, and I would not have learned about this awesome activity!  Life lesson- put yourself out there and connect with people!]

I was excited to read this response, because it seemed easy enough.  But I was also nervous because I had never done it before and I was worried that the switching back and forth between the video, Desmos, and my Promethean board software to draw the curve would be confusing and that with all that technology, something was bound to go wrong!  So I told my students on Monday that I had a fun activity planned, but it may not go perfectly, and I was gonna take the risk. They were totally ok with that!

The first thing I did was film two students throwing a ball in front of my board.  It took a few tries to get it right.  I filmed in slow motion as Todd suggested because it is way cooler! 😁

Then, I uploaded the video and used the “desktop annotate” feature on my Promethean board software to plot the vertex of our parabola and a few other points in the path of the ball.  Next, I opened Desmos and we moved the coordinate plane around until we found some nice points for the vertex and one of our plotted points.  We found the coordinates and at this point my students did not know how to find the equation of the quadratic using only a point and a vertex, so I showed them.  We worked together to find the equation, then went back to Desmos to graph the equation.  I traced the parabola, then we opened up the video again to see how we did!  Here’s the video of us watching it for the first time:

It was so neat to watch the ball follow the path of the parabola that we used algebra to create!  It wasn’t perfect, but it did lead to some authentic conversation about human error and how we could have made it better!  Here is another video:

After this, we also learned how to create the equation of a parabola when given a set of data using quadratic regression.   We used Desmos, of course.  Because life with Desmos is better!

All-in-all, it was a win in my book!  It was the same lesson I taught last year, but it wasn’t dry, and it (hopefully) wasn’t forgettable!

View all posts by andresasser