No surprises here – I love Desmos.  I have used Desmos for about two years now, but it seems like every time I use it, my love grows stronger.  Desmos.com is the only way we graph in Algebra 1, it’s our most popular choice in Algebra 2, we have had a ton of fun with the geometry feature in my geometry class, and I use the activities with both my middle school and high classes every single chance I get.  My students know and love Desmos, too. But it is so much more than just a graphing calculator.  This week Desmos has been particularly useful in my classroom…for discovery purposes.

One of my favorite things to do to introduce a lesson is play a polygraph. I like doing this BEFORE they have any formal vocabulary.  So on Monday, my students played this polygraph: https://teacher.desmos.com/polygraph/custom/560c53f3441172070b2621f9
(H/t to @mrbenzel)

This particular class has an odd number of students, so I played too. It was challenging for me to ask questions without giving away too much vocabulary! This is a shot of some of the questions they asked.  I would be lying if I said this was an easy game for them. They had a hard time coming up with questions that helped them eliminate quickly, but I really enjoyed reading their questions and I think they did an awesome job for not knowing anything about the graph of a polynomial.

On Tuesday, we began talking about the types of polynomials.  I gave them the notes on the types of polynomials and an example of each one. Then, I led in to what the graphs look like.  I even wrote myself a note in my textbook LAST YEAR to use Desmos, and use Desmos we did.  I had them graph each “example”, and I added another example of each type.  I had them type each equation in, then turn them all off.  We turned on one polynomial at a time, and I had them “notice and wonder” things.  Then I had them turn on just the even degree polynomials.  Then we turned those off and turned on the odd degree polynomials…more notice and wondering…and of course they noticed the end behavior of each type.  It was perfect – exactly what I was hoping for.  Then we predicted what would happen if we made each leading coefficient negative.  And then we did it, and their prediction was correct. 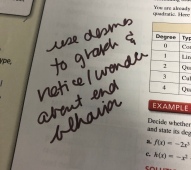 The whole idea of them discovering the end behavior with Desmos was SO MUCH BETTER than just giving them the notes. It’s fun to manipulate the graphs and watch how they change.  They were satisfied with the end behavior, but they had many questions about WHY each graph looked like it did.  They wanted to know where the relative maximum and minimum points came from.  In their words – what makes the humps?  The best way I knew to explain it was to let them see it.  So, I took the 3rd degree polynomial that we had just graphed and made a few different forms of it taking away terms each time.  I had them graph each one on the same graph.  This is what I had them graph:

This was cool!  They could really see how each term changed the graph.  To me, this is the kind of exciting, beautiful math that Desmos is made for!  The real-time results just don’t happen as authentically with a hand-held calculator.

After the rest of that lesson, and the conclusion of the lesson on Wednesday, it was time to play polygraph again. We played the exact same one.  Take a look at this: 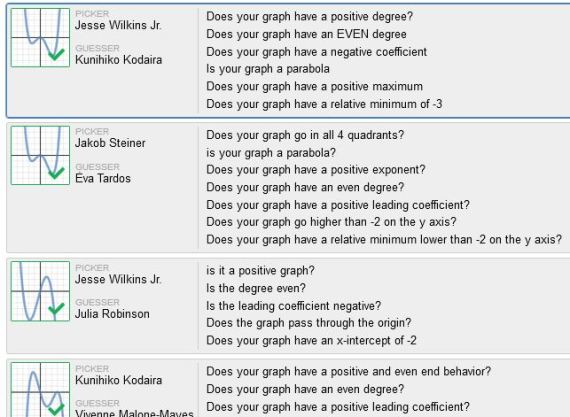 This makes my math teacher heart SO HAPPY!  They learned so much vocabulary in two short class periods. They were able to apply what they learned from the Desmos graphing calculator to describe graphs in a whole new way!  This is why I love polygraph.  Even they commented on how much easier it was the second time around.

Desmos also played a huge role in my Algebra 1 class this week.  I teach 8th grade math and Algebra 1 in the same year to my 8th graders, so they have done very little graphing up to this point.  We are about to begin graphing linear equations, but we have been talking about functions and domain and range.  This problem came up in our Springboard lesson on “more complex graphs”.  A graph like this is not something I would have normally introduced in Algebra 1, but as this is my first time using some Springboard lessons AND because I knew I had Desmos… I took a chance and showed them this “complex” graph.

I let them look at it for a few seconds, and I simply asked what they thought.  Almost immediately a student very confidently told me that the lines would eventually meet.  “Awesome…let’s find out where” was my response.  So we popped that bad boy into Desmos and I had him come up to the board to find the intersection.  LOTS of zooming and scrolling and zooming and scrolling and zooming and scrolling led to him and his classmates deciding that maybe they won’t ever meet.  THAT was a fun moment to watch as a teacher.  That literally would not have been possible without Desmos.  His ability to come stand in front of the class and manipulate the graph to his liking with the whole class watching- that was Desmos magic.

On Tuesday, I introduced them to graphing horizontal and vertical lines.  Once again, we used Desmos.  I gave them equations like x = 3, y = 6, x = -4, y = -11, x = .5, etc.  I had them turn on all the x =  graphs, and then the y= graphs.  They were very quickly able to see which equations graphed as horizontal lines and vertical lines.  Simple, but so, SO effective.

All of this to say thank you. Thank you to the amazing and inspirational team at Desmos. Thank you for creating a product that has elevated my teaching to a new place, far beyond where I was nine years ago when I started.  Thank you for keeping your product free.  Thank you for supporting and loving teachers.  From all of us, thank you.

View all posts by andresasser